There are multiple ways to connect to your Nerves target device and different target may support different connection methods.

The default features are different depending on Nerves targets. For example, some Nerves targets support a UART serial console by default; others, HDMI and USB keyboard instead.

What features does Nerves support for my device?

Refer to the documentation of nerves_system_<target> projects for their supported features. As an example, when your target is rpi0, visit https://hexdocs.pm/nerves_system_rpi0.

A target device can be accessed via a serial connection with a USB to TTL serial cable, which is connected between the host USB port and a couple of header pins on the target.

This connection method allows you to interact with the console of the target device using a terminal emulator program on your development host. It is useful for debugging networking or the boot process and for advanced development workflows.

First of all, locate the documentation of the Nerve system that corresponds to your target device, and find out how your Nerves system supports the IEx terminal feature.

As an example, as of this writing, the documentation of nerves_system_rpi0 (a Nerves system for Raspberry Pi Zero) says the system supports one UART port named ttyAMA0 available for IEx terminal. It is /dev/ttyAMA0 in the file system. 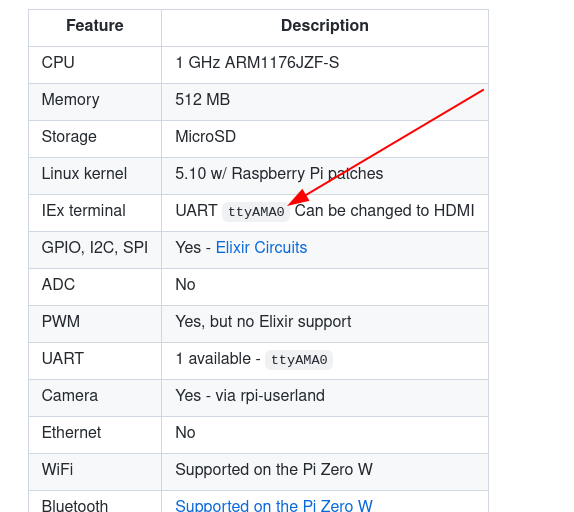 It is configured here in the nerves_system_rpi0 source code.

On the Raspberry Pi Zero, the UART that is known as UART0 in the hardware descriptions is routed to pins 8 and 10.

On Linux on the Raspberry Pi Zero, UART0 is exposed as the device file /dev/ttyAMA0.

Depending on your target's default settings, you may need to modify your Nerves configuration as described in the Using a USB Serial Console FAQ topic.

Get a USB-to-TTL serial cable

We've had good luck with this cable if you haven't already found one.

You may need to install to your host machine the driver software for the cable. If you use the above-mentioned cable, Adafruits provides this guide. 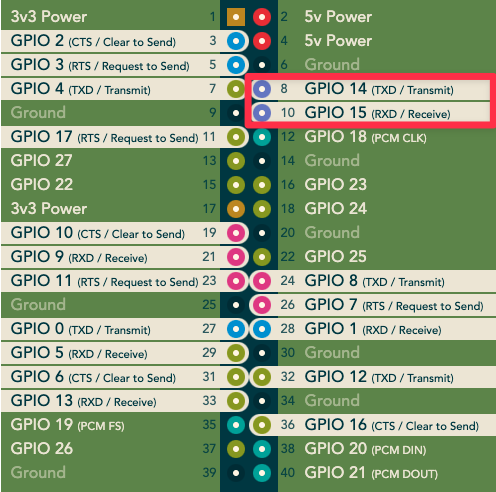 Most likely you don't need the power line since your purpose here is the serial data communication.

TX (transmit) and RX (receive) are relative terms. What is TX for one is RX for the other.

The USB-to-TTL serial cable converts the text into a standard serial USB port. There are multiple open source terminal emulator programs out there that support the serial console.

As an example, on a macOS host machine, you can open a terminal and try these commands.

Replace ttyUSB0 with the TTY device that has the USB-to-TTL serial cable. They usually have the letters "USB" somewhere in the name.

You should be at an iex(1)> prompt. If not, try pressing Enter a few times.

First boot shows error messages due to the file system not being formatted. Seems like something is wrong even though it isn't. This is visible if you attach to the UART and watch the messages the very first time that you boot off a MicroSD card.

Toolshed's exit not working in the serial console

It works, but Erlang doesn't automatically restart the shell. You should be able to type CTRL-G to get the Erlang job menu.

"could not find a PTY" Error when running screen command

Unplug the USB connector and re-plug it.

On some Raspberry Pi family of targets, the IEx console is displayed on the screen attached to the HDMI port by default. You can simply connect your target device to a monitor or TV.

Some Nerves targets can operate in Linux USB gadget mode, which means a network connection can be made with a USB cable between your host and target. The USB cable provides both power and network connectivity. This can be a convenient way to work with your target device.

Make sure to plug the USB cable into the USB OTG port. For example, the Raspberry Pi Zero has two USB ports. The OTG one is the "middle" one. The other one is power-only.

Make sure your USB cable supports data transfer. Generally there are two types of USB cables:

Once the target is powered up, test the connection from your host:

To make a connection via the Linux USB gadget mode virtual Ethernet interface:

You should find yourself at the iex(hello_nerves@nerves.local)1> prompt.

To end your ssh connection type exit, or you can use the ssh command <enter>~.

nerves.local is an mDNS address

Most examples in this page are done with a macOS host, which has mDNS enabled by default. Linux and Windows hosts may have to enable mDNS networking.

USB gadget mode also supplies a virtual serial connection. Use it with any terminal emulator like screen or picocom:

It might be caused by this, so install the optional USB Ethernet/RNDIS Gadget driver to fix it.

The config/config.exs generated in a new Nerves project will set up connections for USB and Ethernet by default.

The nerves_pack dependency simplifies the network setup and configuration process. At runtime, nerves_pack will detect all available interfaces that have not been configured and apply defaults for usb* and eth* interfaces.

If you want to use some other network configuration, such as wired or wireless Ethernet, refer to the nerves_pack documentation and the underlying vintage_net documentation as needed.

← Previous Page Getting Started
Next Page → IEx with Nerves