Exq is a job processing library compatible with Resque / Sidekiq for the Elixir language.

Do you need Exq?

While you may reach for Sidekiq / Resque / Celery by default when writing apps in other languages, in Elixir there are some good options to consider that are already provided by the language and platform. So before adding Exq or any Redis backed queueing library to your application, make sure to get familiar with OTP and see if that is enough for your needs. Redis backed queueing libraries do add additional infrastructure complexity and also overhead due to serialization / marshalling, so make sure to evaluate whether it is an actual need or not.

Some OTP related documentation to look at:

If you need a durable jobs, retries with exponential backoffs, dynamically scheduled jobs in the future - that are all able to survive application restarts, then an externally backed queueing library such as Exq could be a good fit.

If you are starting a brand new project, I would also take a look at Faktory. It provides language independent queueing system, which means this logic doesn't have to be implemented across different languages and can use a thin client such as faktory_worker_ex.

This assumes you have an instance of Redis to use. The easiest way to install it on OSX is via brew:

If you prefer video instructions, check out the screencast on elixircasts.io which details how to install and use the Exq library: https://elixircasts.io/elixir-job-processing-with-exq

By default, Exq will use configuration from your config.exs file. You can use this to configure your Redis host, port, password, as well as namespace (which helps isolate the data in Redis). If you would like to specify your options as a Redis URL, that is also an option using the url config key (in which case you would not need to pass the other Redis options).

Configuration options may optionally be given in the {:system, "VARNAME"} format, which will resolve to the runtime environment value.

Exq supports concurrency setting per queue. You can specify the same concurrency option to apply to each queue or specify it based on a per queue basis.

Concurrency for each queue will be set at 1000:

Exq will automatically retry failed job. It will use an exponential backoff timing similar to Sidekiq or delayed_job to retry failed jobs. It can be configured via these settings:

Note that scheduler_enable has to be set to true and max_retries should be greater than 0.

Any job that has failed more than max_retries times will be moved to dead jobs queue. Dead jobs could be manually re-enqueued via Sidekiq UI. Max size and timeout of dead jobs queue can be configured via these settings:

You can add Exq into your OTP application list, and it will start an instance of Exq along with your application startup. It will use the configuration from your config.exs file.

When using Exq through OTP, it will register a process under the name Elixir.Exq - you can use this atom where expecting a process name in the Exq module.

If you would like to control Exq startup, you can configure Exq to not start anything on application start. For example, if you are using Exq along with Phoenix, and your workers are accessing the database or other resources, it is recommended to disable Exq startup and manually add it to the supervision tree.

This can be done by setting start_on_application to false and adding it to your supervision tree:

Exq uses Redix client for communication with redis server. The client can be configured to use sentinel via redis_options. Note: you need to have Redix 0.9.0+.

If you'd like to try Exq out on the iex console, you can do this by typing:

You can run Exq standalone from the command line, to run it:

In this example, "arg1" will get passed as the first argument to the perform method in your worker, "arg2" will be second argument, etc.

You can also enqueue jobs without starting workers:

You can also schedule jobs to start at a future time. You need to make sure scheduler_enable is set to true.

Schedule a job to start in 5 mins:

To create a worker, create an elixir module matching the worker name that will be enqueued. To process a job with "MyWorker", create a MyWorker module. Note that the perform also needs to match the number of arguments as well.

Here is an example of a worker:

We could enqueue a job to this worker:

The 'perform' method will be called with matching args. For example:

If you'd like to get Job metadata information from a worker, you can call worker_job from within the worker:

The list of queues that are being monitored by Exq is determined by the config.exs file or the parameters passed to Exq.start_link. However, we can also dynamically add and remove queue subscriptions after Exq has started.

To unsubscribe from a queue:

To unsubscribe from all queues:

If you'd like to customize worker execution and/or create plugins like Sidekiq/Resque have, Exq supports custom middleware. The first step would be to define the middleware in config.exs and add your middleware into the chain:

You can then create a module that implements the middleware behavior and defines before_work, after_processed_work and after_failed_work functions. You can also halt execution of the chain as well. For a simple example of middleware implementation, see the Exq Logger Middleware.

Using with Phoenix and Ecto

If you would like to use Exq alongside Phoenix and Ecto, add :exq to your mix.exs application list:

Assuming you will be accessing the database from Exq workers, you will want to lower the concurrency level for those workers, as they are using a finite pool of connections and can potentially back up and time out. You can lower this through the concurrency setting, or perhaps use a different queue for database workers that have a lower concurrency just for that queue. Inside your worker, you would then be able to use the Repo to work with the database:

To use alongside Sidekiq / Resque, make sure your namespaces as configured in Exq match the namespaces you are using in Sidekiq. By default, Exq will use the exq namespace, so you will have to change that.

Another option is to modify Sidekiq to use the Exq namespace in the sidekiq initializer in your ruby project:

If you would like to exclusively send some jobs from Sidekiq to Exq as your migration strategy, you should create queue(s) that are exclusively listened to only in Exq (and configure those in the queue section in the Exq config). Make sure they are not configured to be listened to in Sidekiq, otherwise Sidekiq will also take jobs off that queue. You can still Enqueue jobs to that queue in Sidekiq even though they are not being monitored:

By default, your Redis server could be open to the world. As by default, Redis comes with no password authentication, and some hosting companies leave that port accessible to the world.. This means that anyone can read data on the queue as well as pass data in to be run. Obviously this is not desired, please secure your Redis installation by following guides such as the Digital Ocean Redis Security Guide.

A Node can be stopped unexpectedly while processing jobs due to various reasons like deployment, system crash, OOM, etc. This could leave the jobs in the in-progress state. Exq comes with two mechanisms to handle this situation.

Exq identifies each node using an identifier. By default machine's hostname is used as the identifier. When a node comes back online after a crash, it will first check if there are any in-progress jobs for its identifier. Note that it will only re-enqueue jobs with the same identifier. There are environments like Heroku or Kubernetes where the hostname would change on each deployment. In those cases, the default identifier can be overridden

Same node recovery is straightforward and works well if the number of worker nodes is fixed. There are use cases that need the worker nodes to be autoscaled based on the workload. In those situations, a node that goes down might not come back for a very long period.

Heartbeat mechanism helps in these cases. Each node registers a heartbeat at regular interval. If any node misses 5 consecutive heartbeats, it will be considered dead and all the in-progress jobs belong to that node will be re-enqueued.

This feature is disabled by default and can be enabled using the following config:

There are many use cases where we want to avoid duplicate jobs. Exq provides a few job level options to handle these cases.

This feature is implemented using lock abstraction. When you enqueue a job for the first time, a unique lock is created. The lock token is derived from the job queue, class and args or from the unique_token value if provided. If you try to enqueue another job with same args and the lock has not expired yet, you will get back {:conflict, jid}, here jid refers the first successful job.

The lock expiration is controlled by two options.

Although Exq provides unique jobs feature, try to make your worker idempotent as much as possible. Unique jobs doesn't prevent your job from getting retried on failure etc. So, unique jobs is best effort, not a guarantee to avoid duplicate execution. Uniqueness feature depends on Exq.Middleware.Unique middleware. If you override :middleware configuration, make sure to include it.

Exq has a separate repo, exq_ui which provides with a Web UI to monitor your workers: 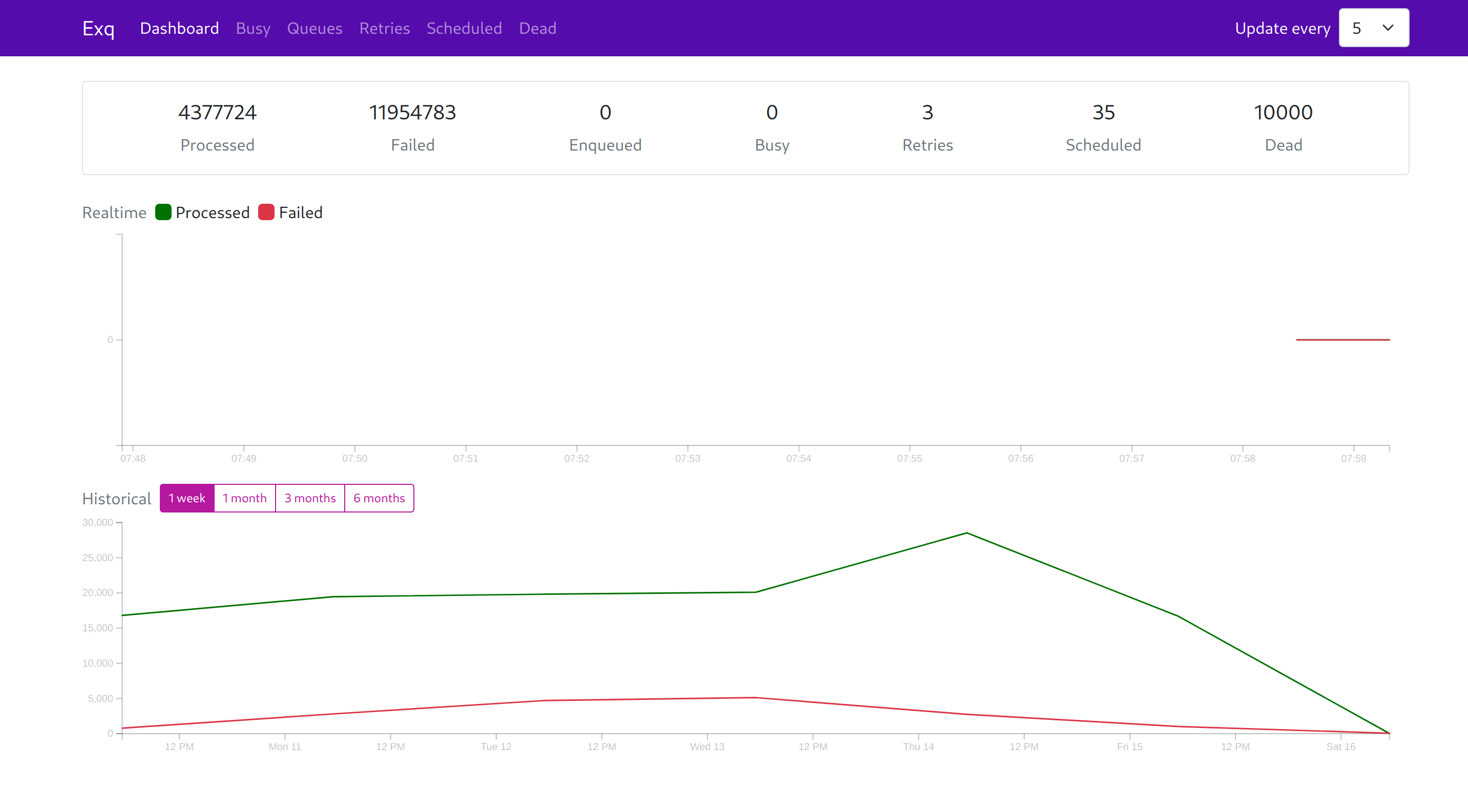 Typically, Exq will start as part of the application along with the configuration you have set. However, you can also start Exq manually and set your own configuration per instance.

Here is an example of how to start Exq manually:

To connect with custom configuration options (if you need multiple instances of Exq for example), you can pass in options under start_link:

By default, Exq will register itself under the Elixir.Exq atom. You can change this by passing in a name parameter:

Exq.Mock currently supports three modes. The default mode can provided on the Exq.Mock.start_link call. The mode could be overridden for each test by calling Exq.Mock.set_mode(:fake)

This could be used for integration testing. Doesn't support async: true option.

The jobs get enqueued in a local queue and never get executed. Exq.Mock.jobs() returns all the jobs. Supports async: true option.

The jobs get executed in the same process. Supports async: true option.

To donate, send to:

For issues, please submit a Github issue with steps on how to reproduce the problem.

Contributions are welcome. Tests are encouraged.

To run tests / ensure your changes have not caused any regressions:

To run the full suite, including failure conditions (can have some false negatives):

Licensed under the Apache License, Version 2.0 (the "License"); you may not use this file except in compliance with the License. You may obtain a copy of the License at http://www.apache.org/licenses/LICENSE-2.0